Next Generation of Military Vessels Launched

‘The Sentinel’ is designed to penetrate the Military and Defence Force, as well as public security and emergency service organisations both domestically and internationally.

The Sentinel is the culmination of our research and development, experience, and relentless focus on the people who rely on our boats, over the last 25 years.

PFG has manufactured over one hundred boats in Hobart, including a number for Tasmania Police, also named the Sentinel, and commissioned by PFG in 2001.

The Sentinel is innovative and unique, being manufactured from High-Density Polyethylene (HDPE) which has a significantly longer work life than aluminium alternatives and offers a safer, smoother experience.

“We are Defence ready; we have the capability, we have the proven performance, we have the future technology that Defence needs. The Sentinel is a world class, proven Australian solution, and it’s built right here in Tasmania,” Chief Executive Officer of PFG, Rob Inches said.

The evolution of The Sentinel is shown in the video here. 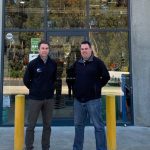