Having recently launched its new high-speed, Tasmanian built tactical watercraft, The Sentinel, PFG Group has today announced the formation of an Advisory Committee for Defence Capability consisting of senior Naval veterans together with experts in public security and trade. The Committee’s focus is to guide and support PFG’s campaign for defence and maritime security contracts both domestically and internationally.

“The Committee formalises pre-existing relationships, which have been supporting PFG for some time,” Committee Chair Chris Oldfield said in Hobart today. “The Committee members have over 100 years of distinguished service, and importantly have held senior operationally-focussed roles within the Defence, Navy, Police, and other national security organisations. I am confident there is no better group to oversee PFG’s Defence campaign as we seek to provide solutions to the inherent problems experienced by watercraft traditionally used in defence and public security sectors.

Rear Admiral (Rtd.) Steve Gilmore knows The Sentinel is the future technology Defence and Maritime Security organisations need. “High-density polyethylene (HDPE) is likely to be the solution to give the capability edge the ADF needs on the water,” he said. “The Sentinel is manufactured from HDPE which has a superior strength to density ratio, high impact resistance, does not corrode or electrolyse, absorbs vibration and is positively buoyant. These characteristics make The Sentinel more durable and virtually maintenance free, providing a smoother ride while reducing fatigue and other safety risks to the vessel operators.

“These fast response vessels have been operating in harsh Tasmanian waters for decades. Unlike composites and carbon fibre, they have a proven pedigree of service and reliability, and have ballistic resistance and vibration advantages.

As a former Commander of the Australian Fleet and Deputy Chief of Joint Operations, RADM (Rtd) Gilmore is joined by a former Commander of Border Protection Command and Head of Navy Capability, RADM (Rtd) du Toit in acknowledging that The Sentinel is a next generation tactical watercraft, that will offer the Australian Defence Force an operationally focussed vessel with superior capability to ensure it can most effectively fight and win at sea and across the littoral domain.

“There is no hiding the fact PFG is eager to win a contract with the Australian Defence Force and internationally. Defence ready – we have the capability, we have the proven performance, we have the future technology that Defence needs and now we have the formalised expert guidance of our Advisory Committee to add a depth of knowledge second to none. The Sentinel is a world class, proven Australian sovereign solution, and it’s built right here in Tasmania to serve and protect,” PFG CEO, Mr Inches said. 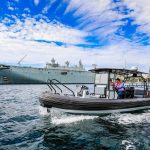